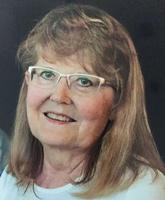 Vicki is survived by her husband, Marshall, of 42 years and her brother, George Jorgenson, both of Bismarck. She is also survived by an extended family of in-laws, nieces and nephews.

Vicki is preceded in death by her mother, Corrine, and father, George.

Vicki was born on Dec. 21, 1951, in Devils Lake. She moved with her family to Benton Harbor, Mich., El Cajon, Calif. and Williston, where she graduated from Williston High School. She received her bachelors degree in Business Administration from the University of North Dakota and later earned her masters degree in Business Administration from UND.

Vicki spent the majority of her 30-year career with the Federal Aviation Administration. She received a kidney from her husband in 2003. She and Marshall made their home in Bismarck, and Mesa, Ariz., where she was very active with knitting, sewing and crafts.

A celebration of life will be held at a later date in Bismarck.

Memorials can be directed to the Polycystic Kidney Disease Foundation